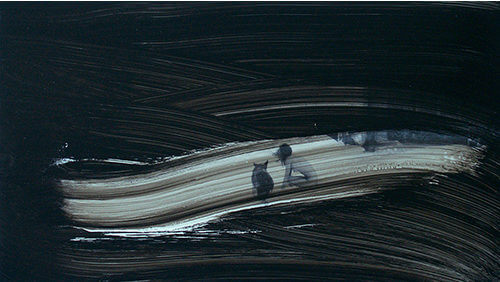 “I am everything and it’s opposite. It might be happening because of the rain, but it seems more and more difficult to identify myself. Where do I start and where do I finish?”

As a child I believed that I used to be a dog in my previous life. It has never become clear where this thought came from– a dream, imagination or a similar experience or perhaps the influence of Vladimir Bortko’s movie “Heart of a Dog” based on a novel by Mikhail Bulgakov. The images of me, a dog, wandering along the streets next to a river, waiting for someone at a white church, trying to stay close to a tall man with a hat, have faded slightly. I, the dog, was not a purebred and my colour was camel brown, but I was a dog that belonged to someone.

The next thing I remember was me peeing as a dog, (at least trying to) in my grandmother’s garden. It happened during the time when dolls had their hair cut off. My grandmother told me to stop,” Good girls don’t do that,” she said. Not that I wanted to be a good girl, it just was not convenient.

I am not sure how much time passed until I suddenly became convinced that dogs have the power to know where the treasure is hidden. So every holiday our family went to the country side, I would pick up my black opera binoculars and observe closely where they made a hole. Later I would ask my brother to come with me to look for the holes. Sometimes I found the magic ring and hundreds of wigs in my dreams.

As I grew older, the only thing that stood between me and dogs was fear. Maybe it was because our countryside neighbours had a pack of 5 dogs. The neighbour told me not to be afraid of them, that their teeth were polished round. But once, when I had to confront them, they made so much noise that I did not know what to do. At the beginning, I said firmly, “Go away, don’t come close, don’t come close,” but since they kept on barking and made such jerky jumps, I decided to change tactics and started to appease them with a kind voice– “Good little doggies, be calm, good dogs, good dogs.” The barking seemed to become even more aggressive so I ran. I did not get far before one of them bit me. The one with polished teeth, I was sure.

Part 5 – The Part that Comes Before Part 6

The bite reassured me even more, that the dogs could feel me, they could feel my lies, they sensed my fears and pretending, and they had surely noticed I was spying on their treasure places. They knew who I was.